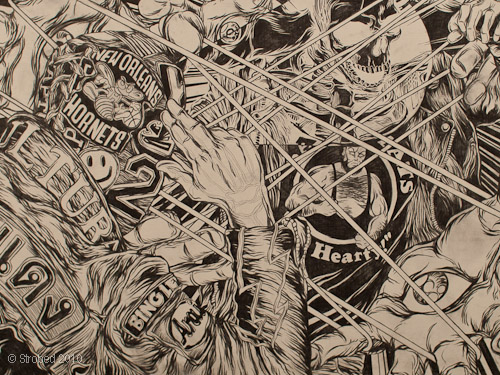 Told Through a Series of Flashbacks - James Jirat Patradoon, 2010

If you like your art with a good splash of pop, you would have to have been in some sort of coma not to have seen or heard of the two artists on show at Boutwell Draper on this fine evening. Ben Frost and James Jirat Patradoon, two artists who share a love of the action paced and the bizarre. 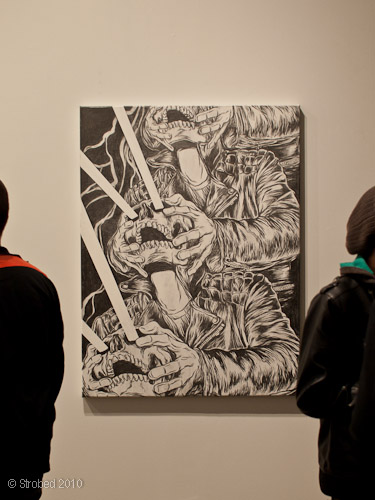 We fell in love with Patradoon’s comic book inspired work with the cover of EMPTY Magazine in 2007. Since then he has taken his portfolio from strength to strength with art and design work for high profile clients from around the world. It is exciting to see that he has also scored himself  kudos from Boutwell Draper, a well deserved recognition of his fine art practice. 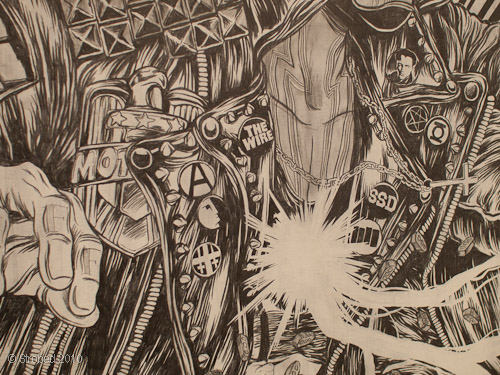 Patradoon’s collection was titled “Heartaches“. Each work was on a large canvas and rendered in graphite and watercolour. Leaning in closely to see his workmanship gave an earthy feel to his violent and emotionally charged compositions, clearly a deliberate step away from the oversized neon screen prints of his past (which were also outstanding!). 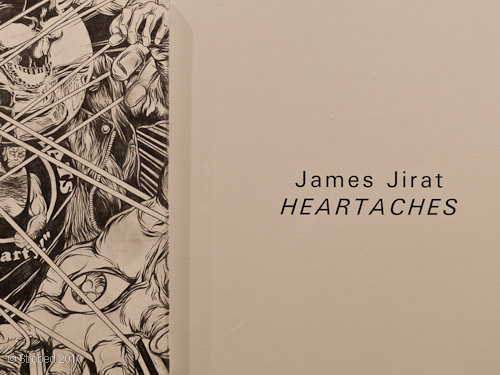 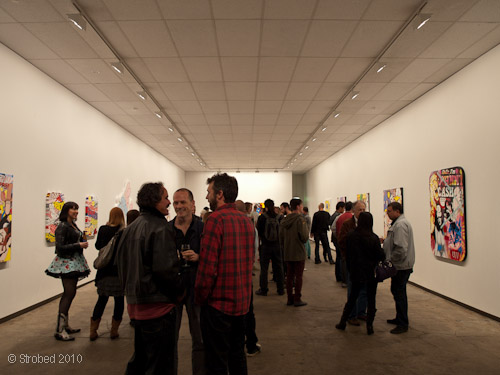 Next we have Mr. Frost. His new collection “The Art of Noise” was electric. He flawlessly layers pop imagery and icons together to create his observations on modern life. Take from them what you will. It’s eye candy as well as food for thought. 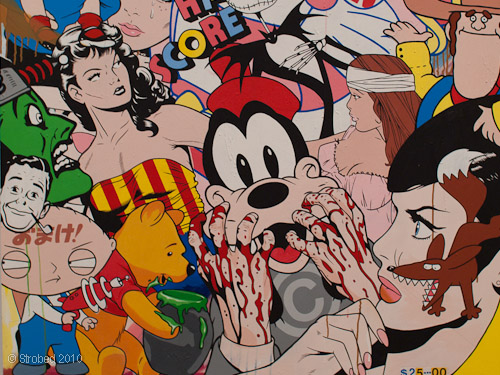 There is always something creepy about Ben Frost’s work. I guess it has something to do with sex, violence and nihilism being embraced by childhood characters. A little too close to the reality of growing up perhaps. 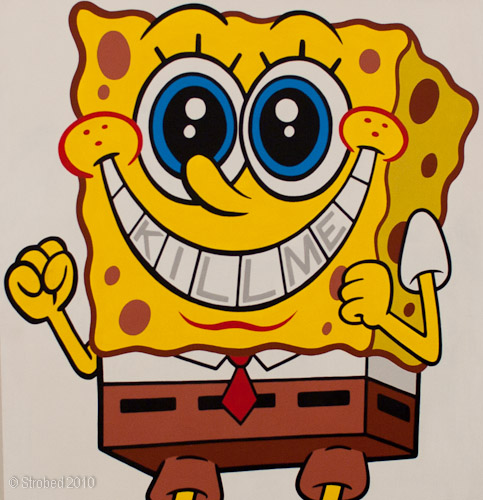 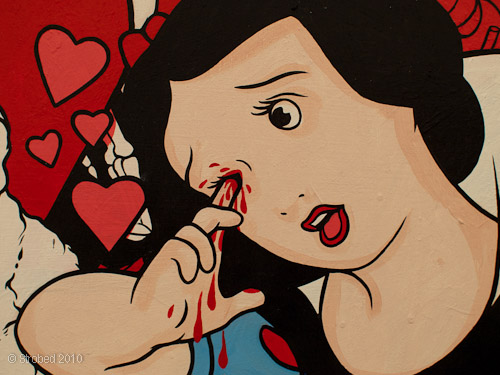 Buying Records Cheers Me Up. Whenever I Feeel Low I Buy Some New Records (detail) - Ben Frost, 2010

Amazing compositions and incredible execution owing to the eye for detail that Frost has. His consistency and respect for with the imagery he uses is results in an reproduction accuracy that is quite staggering. Not everything with a perfect line is a pure Photoshop creation – suck it Adobe. 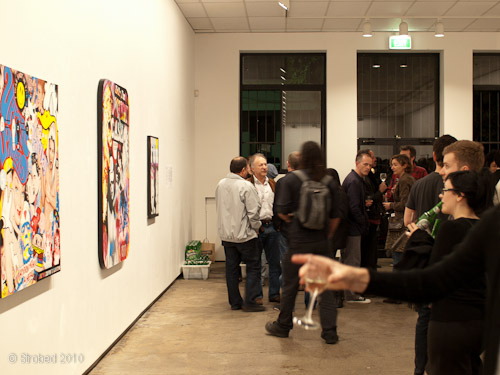 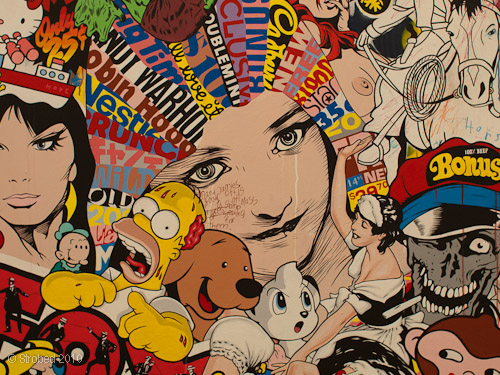 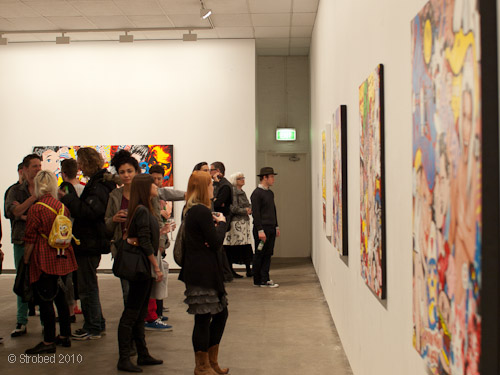 The gallery was filling as we wandered through. With Ben Frost having such a huge role in helping out emerging artists through StupidKrap and other initiatives, there was no doubt that the crowd was going to be massive with fans, friends and buyers. 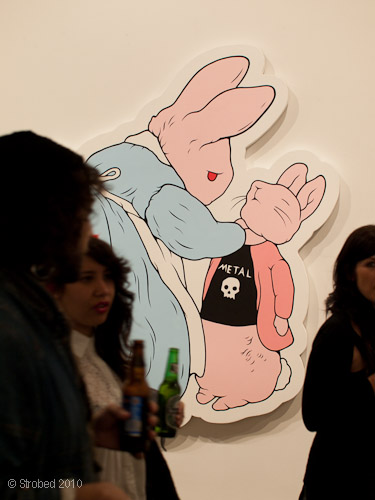 She Never Cared Much For Heavy Metal - Ben Frost, 2010 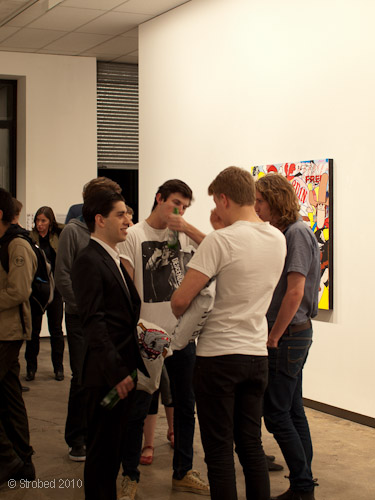 And so, before the urge for another beer gets too strong we are outta here. Until next time.